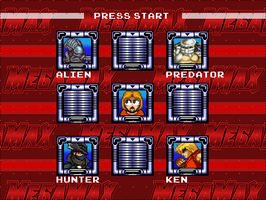 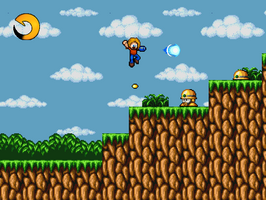 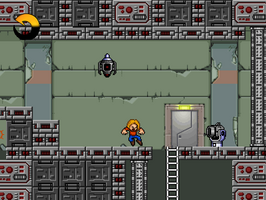 Holy heck it took me 20 days? but anyways Predator Stage is now complete! because of this i have now disabled the ability to switch Weapons, sadly the controls still allow you to press the buttons to switch weapons which will kinda mess with the animations, that is until you cycle back to whats supposed to be the mega buster, so please avoid it unless you actually beaten one of the stage bosses,

Item Get screen has also been upgraded to last a bit longer and now it has all the weapon animations when applicable,

i also fixed a glitch that you could still press Jump when entering a stage which would permamently leave Max stuck, speaking of glitch, due that this game is expanding, it is going to be harder for me to find and fix glitches, please report any if they happen! thank you!

Wow a one day update? well cool then! anyways todays update now includes a "Options" settings on the main menu, here players can modify the Volume of the music and sound effects, i generally have these on a low, but those who want to kick it up a notch or simply mute them can do it here!

also i failed to notice not everyone has an xbox 360 controller plugged into the computer at every moment like i do, so i have added "Arrow Key" controls on the main menu and players can press "Enter" to access all of the options, primarely hoping that they go to the Options setting or even review the "Controls" to fully switch to keyboard controls, the reason this happens is because the application defaults to having the xbox controller as the main input device, which Nulls out most keyboard presses ,  this may change depending on feedback, but i will most likely leave the keyboard as the default device in the future.

I figured that if im going to fix all the audio sounds and make a new stage, i should focus and finish all of the 4 available sub weapons...which i have! so for this current build, you can try out all 4 sub-weapons, i am still debating whenever or not to allow the megabuster to be used while having a sup-weapon equipped, depending on feedback i will consider doing that, but for now use the "Main Weapon" button to unleash your special boss weapon! there is currently no way to replenish weapon ammo (unless you die), so use it wisely!

Acid Shield is now able to be used! once you defeat the boss you can Re-enter the stage and select it using the (1) or (2) numpad keys, or use the LB and RB triggers on the xbox controller to switch it, this works like most Megaman Shield weapons it swirls around to protect Max if any enemy touches the shield they will be destroyed, but be careful getting to close will get you hurt! alternatively while the shield is out you can press the fire button again to throw it, it travels slow but it hits just as hard, however this weapon is not very effective against the Alien Boss, but...maybe in the future it will have more uses~

Alien Stage is now Complete!: Have fun defeating this monster! also the music is just a placeholder, which is why its barely audible i have commissioned someone to make a stage theme, music takes several weeks to be done, so i will be working on other things, its most likely it will be added by an future update

Wall Sliding Added: this should make wall jumping easier, also a small section for players to understand the kind of Wall Jumping that is on this game, since it is not like Megaman X, it is more like the Mario style of wall jumping

Greetings everyone! just taking advantage of this dev log to post future updates, currently the stage "Alien" is almost complete, the stage layout and enemy placement is done, now i just need to actually add the Stage Boss fight, much like in megaman games, it wont be super hard, but i do want to make it at least challenging, i also dont know what to do for Music...i hope i can either find a good stage song and boss fight song, also i notice the jump is a bit "Floaty" but the current platform engine im using kinda forces that to happen, i will try to find a solution though! until then, now i just need to make more cover art and finish up that boss!